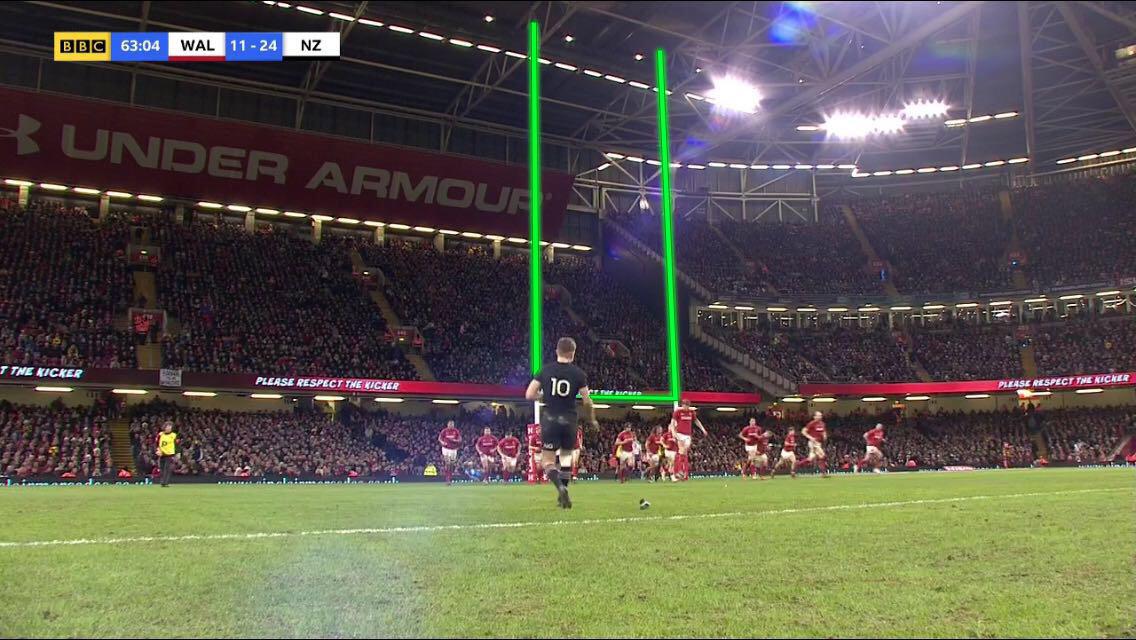 A - There will be independent systems installed on each set of goalposts meaning that only one will be in use at any one time. The systems will not communicate with each other (they will be programmed on different frequencies) and will be operated by different people with different switches.

Q - Will only one end light up or both?

A - In the event of a penalty/drop goal/conversion the goal posts where the event has occurred will light up indicating the team that has scored.

Q - What is the thickness of the system and will it impede on the width of the posts?

A - The system is 8mm depth and thus when fully installed will take up just 1.6cm of the 5.6m official width of the posts so will not impede on the distance between the posts in any way.

Q - How will the system perform in the midday sun?

A - Addressable LED's allow us to finely tune colours and brightness of the lights to suit individual venues surrounding area and varied light and weather conditions, along with the needs of any broadcast media. The system will comprise of between 30,000 and 45,000 individually addressable LED's spread over multiple circuits powered by two separate rechargeable battery packs.

Q - What are the fail safes in place if one goes down?

A - The system is designed with double redundancy in mind, the LED elements of the system have multiple circuits mixed throughout the goal posts so if any part of the system should fail the fans experience should not be effected as the LED elements are so closely arranged that any missing LED elements should not be visible from any further away than 10m, this double redundancy also applies to the 4 sets of battery packs which will be located in pairs at the base of both uprights, the activation system will also consist of two independent transmitters and receivers on different RF frequencies with individual batteries, however in the worst case scenario of one set of posts completely failing we would seek guidance from World Rugby on how you would like us to proceed, either with just one set of posts or discontinue use of the system until repairs can be effected

Q - How quickly can a new device be installed (at night between days if required)?

A - The system is constructed with multiple 1m elements allowing for easy exchange replacement of an element is just a case of unlacing the affected element and releasing a simple plug connection, this could easily be done either during a break or overnight, we will have multiple spare elements available on site to cover any such eventuality.

Q - What if somebody from production or the crowd using the same frequency activates the system at the wrong time ?

A - Triggering will be via an encrypted wireless system removing the possibility of outside interference from any source, the control equipment will again be housed on the rear of the uprights along with the battery packs. The activation system will also consist of two independent transmitters and receivers on different RF frequencies with individual batteries.

A - It will consist of a handheld switch unit similar to a conventional joystick connected to a belt worn battery and transmission pack. The trigger will be a two stage grip and press (‘dead mans switch’) so if dropped or accidently triggered it will not engage the system, The final version will have the top buttons in red and green, to operate the system the trigger will need to be pulled and then the relevant red or green button pushed.

A - The operators will react to the officials flags, they will aim to trigger the system just before the match official raises their flag to ensure the timing is perfect.